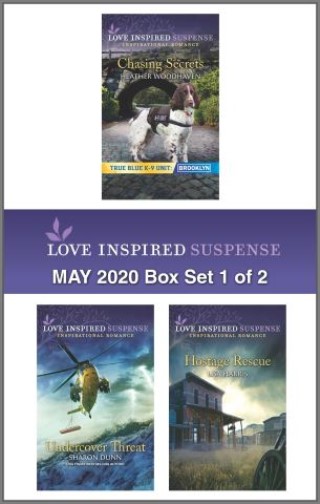 When Karenna Pressley stumbles on a man trying to drown her best friend, he turns his sights on her—and she barely escapes. Now Karenna’s the only person who can identify the attacker, but can her ex-boyfriend, Officer Raymond Morrow, and his K-9 partner keep her alive?

Forced to jump ship when her cover’s blown, DEA agent Grace Young’s rescued from criminals and raging waters by her ex-husband, Coast Guard swimmer Dakota Young. Now they must go back undercover as a married couple to take down the drug ring, but can they live to finish the assignment?

A hike turns deadly when two armed men take Gwen Ryland’s brother hostage and shove her from a cliff. Now with Caden O’Callaghan, a former army ranger from her past, by her side, Gwen needs to figure out what the men want in time to save her brother…and herself.

Heather Woodhaven: Heather Woodhaven earned her pilot’s license, flew a hot air balloon over the safari lands of Kenya, assisted an engineer with a medical laser in a Haitian mission, parasailed over Caribbean seas, lived through an accidental detour onto a black diamond ski trail in the Aspens and snorkeled among sting rays before becoming a mother of three and wife of one. Heather channels her love for adventure into writing characters who find themselves in extraordinary circumstances.Sharon Dunn grew up in the country where there was ample opportunity for her imagination to flourish. She started writing when she was pregnant with her oldest son. Three kids and a lot of diaper changes later, she has published both award winning humorous mysteries and romantic suspense. Her hobbies include reading in small increments, trying to find things around the house, being the mom taxi, and making pets out of the dust bunnies under her furniture.

LISA HARRIS is a best-selling author, a Christy Award, and two time winner of the Best Inspirational Suspense Novel from Romantic Times. She and her family have spent fourteen years working as missionaries in Africa. She loves hanging out with her family, cooking different ethnic dishes, photography, and heading into the African bush. Visit her website at lisaharriswrites.com